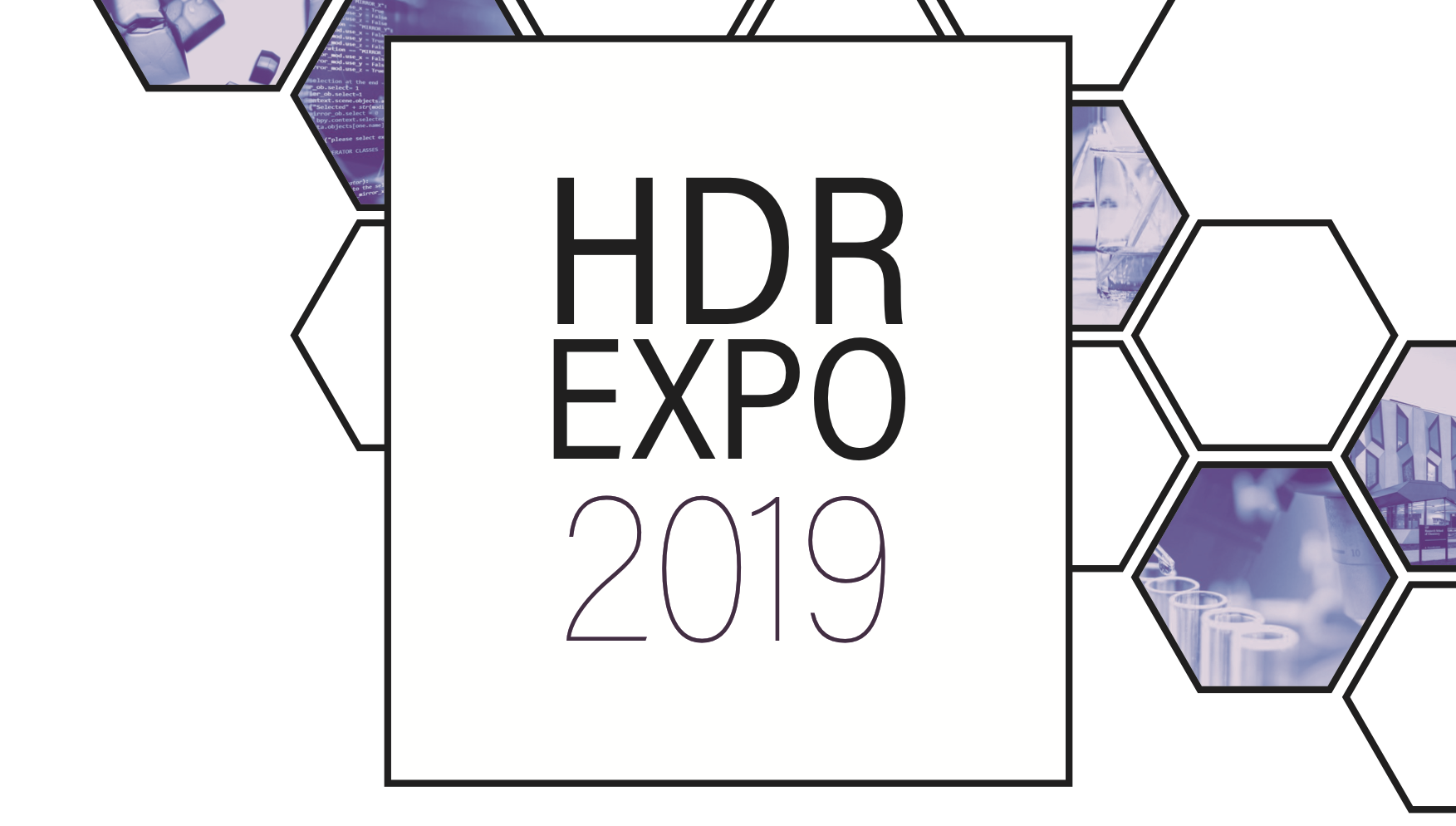 It was fantastic to hear so many entertaining but informative talks yesterday at the Research School of Chemistry Expo. We had 25 speakers (including me!) from almost every area of research around the school. Around 80 people attended, compared to around 50 last year; 71 people voted on the People’s Choice awards in the first session, and 60 in the second. This is just a post to gather my thoughts about an event that we’ve been organising in drips and drabs since March.

The response to this event is particularly gratifying due to the many changes we made this year:

Historically, (ie the past 3? years), the RSC expo has followed this format: a workshop on writing, a workshop on presentation, and then a day of 8-minute research seminars. The expo was targeted at 2nd year PhD students for the expressed aims of improving the social cohesion of the cohort and preparing them for their mid-term seminar (30 min) and thesis proposal review. When I joined the HDR committee last year, I thought scheduling this expo for second-year students really did not mesh with those aims. The mid-term seminar and thesis proposal review occur at 15 months, so most 2nd-years will have completed these long before they participate in the expo. Many students have also been to conferences by 2nd year and presented talks or posters. Finally, you should introduce people in first year before habits and cliques are solidified.

In 2019 I became the chair of the HDR committee and pushed for some of the changes above. There were circumstances that helped:

But I’d be lying if I didn’t say I was super nervous on yesterday morning. The workshops had garnered a lukewarm response; we will have to think about those. One of our 3MT judges was late for the actual event, despite being asked to arrive 10 min early. (This turned out to be a blessing in disguise: around a 1/3 of the audience filtered in during that time). Miraculously, the event held remarkably close to schedule nonetheless. I credit that to our amazing MC, Heather.

The main problems occurred because of high attendance.

Last year 50 people came; this year I optimistically hoped for 60. I made an order that would feed 70, according to the caterer’s menu. This was a mistake. If the quantity of food that came would have actually fed 70 people, I think we would have been fine. Instead, the salads described as “feeds 10 people” would have fed maybe 5 starving students, at best. And then, of course, 80 people showed up. So note to self: double any orders from the ANU union.

The room was also really warm. We couldn’t turn the heating down, as there was no thermostat; the Science Teaching Building has chemistry and biology labs in it, so I’m pretty sure professional staff retain control of the environment.

1. Moving from pen and paper to an online voting system with multiple choices

I was worried that this slightly higher barrier would decrease voting. Given that 75% people voted in both sessions, it apparently didn’t (to a significant extent). Having a QR code helped, as most modern smartphones can just take a picture of it and click the link that pops ups. This simplified counting a lot! Patrick organised this through Google Forms.

Voters could vote for up to three speakers in a session of 12 or 13. This worked well for us because we had both judges’ prizes and People’s Choice. The winner of the 3MT actually won the People’s Choice as well, but we were able to spread the awards around. I also had a flick through some individual anonymised responses – many people only voted for one or two speakers, so they didn’t feel pressured to choose three.

2. Using a venue with two screens, and a booklet

Screens? Backdrops? The flat white canvas things that the projectors, well, project onto. Having two of those meant that we could show the speaker’s slide on one, and their name/supervisor/talk title on the other. I think this helped a lot with remembering who gave which talk after the session. Having the HDR booklets as well meant that many audience members marked down whose talks they enjoyed and could speak to them later.

3. Asking the judges to use 3MT criteria in judging

I wasn’t sure about this one – either about treading on their toes or about enforcing 3MT values. The 3MT, for example, wants speakers to tailor their talk to a general audience – but the RSC 3MT is for a general audience with tertiary degrees in chemistry. I think, overall, it worked. I modified the wording of the criteria a little and simplified the marking scheme to “yes, no, maybe” for each guideline. I spoke to a judge during the day; he said that he was sceptical at first, but found it was helpful to break talks down like that, especially at the fast pace of a 3-minute talk. 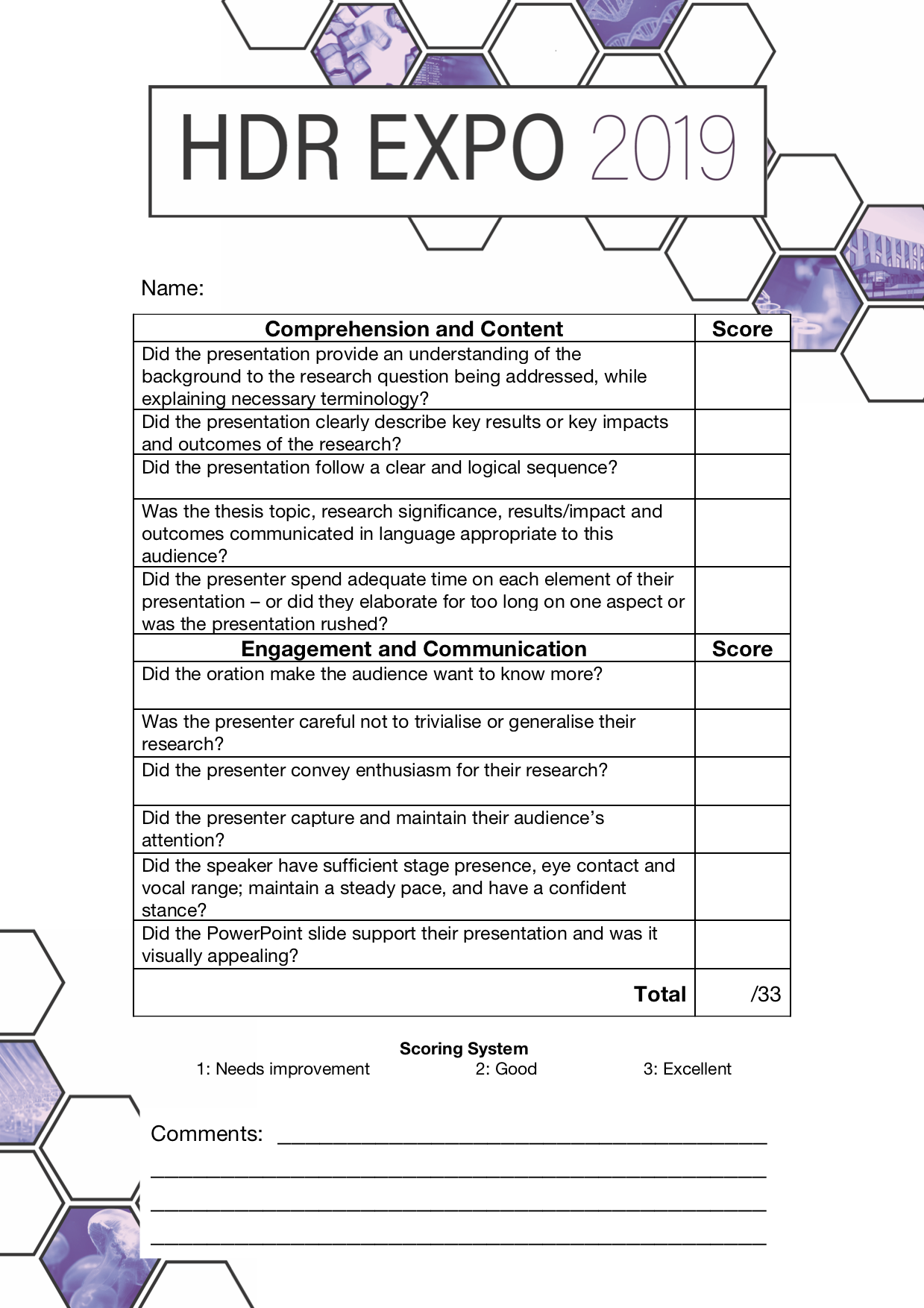 Improvements for next year

I now regret not asking someone to act as a photographer for the day and the awards ceremony, or arranging to film the talks. This would have been great for the social media profile of the RSC, and therefore any future HDR committee actions. It’s all the more painful because I had actually arranged for this last year, for the expo that fell a bit flat. Next year, for sure.

We have now received 10 surveys from attendees of the expo (a 250% improvement over last year) and I have had verbal feedback from many people. The writing workshop was not very relevant to the 3MT presentations – understandable – and the “Storyboard your Thesis, Pitch with Impact” didn’t quite hit the mark. Having now attended all of the Research Training department’s 3MT-related workshops, I agree. The “How to win the 3MT” workshop would have been much better suited to this project.

3. Diversity in the judging panel

This was in the survey feedback, and I agree with this. We had all white, male judges this year. There are many qualified academics who could have judged. Of course, not everyone wants to – it is quite a bit of work. We should have put more thought into this.

Every leader in the People’s Choice, and every winner overall, was a native English speaker from Australia. I’m not sure how we can change this situation, but it merits some thoughts.

I am personally very happy with how yesterday went, and also very glad that it’s over. (Aside from the social media stuff, post-mortem, accounting, etc …) And while the HDR committee put a lot of work into organising the event, it was ultimately carried by the speakers and the audience. Maybe I’m too jaded and cynical, but I was bowled over by the enthusiasm and goodwill that was shown – people actually prepared and practiced their talks, got their slides in on time, voted for good speakers over (or perhaps in addition to) their friends… it was a good afternoon. I aim to be overseas by next year, but I look forward to seeing what the expo looks like in 2021.